Phil Thompson is an experienced freelance front-end web developer; currently splitting his time between a number of different digital agencies and clients across cities in the UK and living in London.

Phil specialises in front-end (e.g. user interface or UI) web code and WordPress. For those of you who don’t understand digital jargon, this means he converts web designs (usually from Photoshop) into fully-functioning websites built upon the incredibly easy-to-use WordPress platform.

Working onsite at numerous digital agencies over the last decade, phil has become very adept at coming in and getting straight to work. Every agency (or in-house team) works slightly differently and each one thinks their methods are *the* best and that everyone else’s are wrong. His job is to finish the project he’s been assigned, impart some of the techniques he’s learnt elsewhere (without, of course, ruffling feathers) and then move onto the next project without the permanent developers cursing the code he’s left behind.

Working directly with clients like Topshop, The Economist and Viacom along with digital agencies.

Through his work with digital agencies, Phil has worked with some large global and national brands including Playstation, The Rolling Stones, Boots, EA Games. This work is usually as part of a team.

Phil is available for freelance/contract work. If you’re a digital/design agency why not get in touch to see what Phil can offer.

What’s with the yellow?

The short answer is because Phil loves it; the longer answer is that it makes the website stand-out. It allows for a very simplistic, some may say, minimalist design that maintains some character.

A photo of Phil: 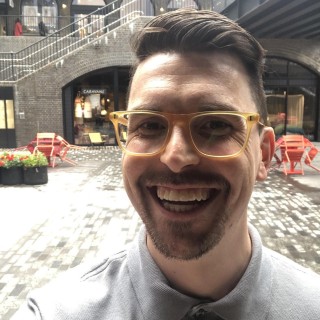 Get in touch with Phil >